I always wanted to be a superhero. I was 4 when I received my brother’s hand-me-down spidey pyjamas which, despite missing the mask, increased my strength tenfold as I threw pillows across the living room with ease.

At 35 I am on the brink of accepting superpowers probably won’t happen and another dream begins its decomposition next to that of a professional footballer, rugby player and Rolling Stones’ guest guitarist. Full disclosure, I am a terrible footballer, school team standard at rugby and have never played guitar. I was pretty much clinging to the idea of a radioactive spider bite as the more likely scenario.

In the absence of my own super powers Marvel Cinematic Universe (MCU) have created the perfect superhero fix for me, and on their latest release date I booked a day’s annual leave to ensure I had time to enjoy Avengers: End Game, spoiler free.

NB: If my fiancé asks I attempted the garden, yet my endeavours were cut short by the unpredictable English climate.

End Game closes the curtain on an epic chapter for Marvel and for cinema. I am in awe of what the MCU has achieved. 11 Years and 21 films since “I am Iron Man” and I greedily consume everything they produce. Having easily made it through the 3 hours 3 minutes of this gripping finale without a toilet break, I sit and reflect on how... how have Marvel achieved it all? And is their recipe for success applicable for startups and other organisations?

Specifically, how do they maintain engagement of fanbase, actors, directors, producers, film crews and writers.

I love the principles of employee engagement. I love the simplicity of the premise, as well as the challenge of implementing and applying it. The reward is that high levels of engagement correlate with high performance. Achieved through everyone working at a company understanding and believing in the business objectives, vision and methodology. Through the lens of digital startups and application of lean methodologies requirements for engagement are heightened and broadened. Startups must go beyond employees to include product, users, as well as your development team and your investors’ alignment with the business.

We can learn an awful lot from Marvel’s approach to engagement and apply it to startups when seeking success. For a startup, keep it simple and break employee engagement into 3 areas of focus:

Any company, big, small or just starting out, should have a Mission statement

Marvel’s mission statement: “A vision as far reaching as our stories.”

Simple and yet incredibly ambitious. A mission statement should be understood by every employee and all should understand their contribution to the mission. The MCU vision is driven by Kevin Feige who has been president of Marvel Studios since 2007.

A mission statement should be concise (within a few sentences). It should say who you are, what you do, how you benefit your customers. Finally it should include what you aspire to be.

Mission Statements can change and as startups find their fit there will likely be a few iterations of the mission. The statement therefore, should be reviewed and shared with employees and users as often as possible. It should be at the core of everything anyone connected with the company does.

Some other famous mission statements:

Facebook original: “To give people the power to share and make the world more open and connected.”

Apple’s 2018 Statement: “bringing the best user experience to its customers through its innovative hardware, software, and services”

Feige’s hands on approach has a lot of correlation with how founders of startups will work, below you can review his eye watering and diverse schedule illustrating how he oversees all things Marvel. The diversity isn’t untypical of a CEO or a founder. Potentially swap “look at colouring of the film” with something a little more mundane, but the timings and amount of meetings will be familiar. 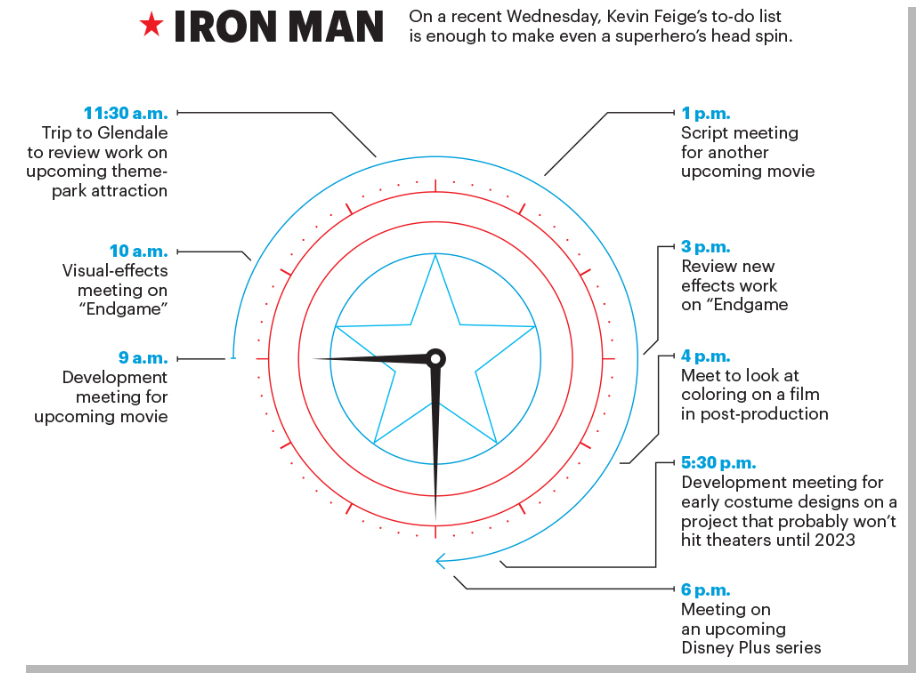 Significant is how his team understand a) the vision / mission statement and b) how Feige, as a leader in the company embodies and works towards this.

Brie Larson, the star of Captain Marvel explains “Kevin trusts who he hires to execute his vision; he doesn’t come to set to micromanage...He seems to understand that his presence there changes the atmosphere. But you also know he’s working tirelessly behind the scenes, thinking up new concepts and ideas to make the best movie possible.”

Employee Engagement, has to begin with the company’s leadership. The leadership team must be a consistent embodiment of how the organisation is working towards the vision.

Leaders responsibilities are to: 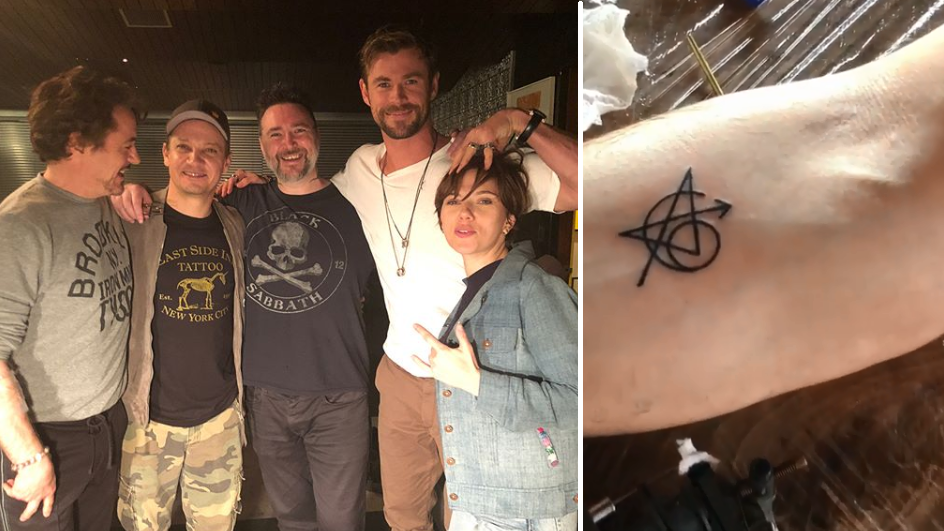 Employees must have a voice, and be confident in communicating their views with their employer. Building a company where employees voices are heard, valued and acted on contributes toward innovation, productivity and ultimately creating a highly engaged workforce that are all chasing the same vision.

The most accessible employees at Marvel are, of course, the actors. Particularly when looking at the 2012 Avengers, who all except the Hulk’s Mark Ruffalo (who reportedly “bottled it”), got matching Avengers tattoos as filming began on End Game. Whilst not absolute proof of an engaged workforce I think getting a tattoo is a decent flag.

Employees who are on the ground know what works and what doesn't. Harnessing contributions of employees can be a powerful way of improving products and overall company performance. If concerns are being listened to and changes are happening that improve the company then employees will feel valued.

Thor: Ragnarok is a great example of the MCU listening and reacting to the talents and views of one of its employees. Chris Hemsworth was not originally hired for his comedic timing, yet working with Taika Waititi unchained an amazing performance and gave further options for the development of the Thor story. Prior to Ragnarok Hemsworth gave an interview stating he was “exhausted and underwhelmed” by his character. With Ragnarok Hemsworth and Waititi felt “it was about breaking all the rules, and kinda going ‘as soon as it feels familiar, do something different’. The leadership team at the MCU listened and the result was a critically acclaimed Thor: Ragnarok making $854 million worldwide, the best box office total of any Thor film.

A slight difference for startups is that they should also think of their early adopters as employees and apply the same principles to engagement. Ensure the company vision resonates, that they have trust in the product and most importantly give them a voice.

To say that Marvel’s success is purely down to engagement would be false. However it exemplifies such great practice of engagement and is reaping the rewards, particularly when contrasted with DC’s floundering Justice League. My passion for superheroes, comic books and the MCU has led me to see how I can backward construct their success and reversing it into startups. There are other great examples of engagement. For example, Gareth Southgates “England DNA” approach with the England Football team is worth a quick google. A favourite and well known example of mine is from JFK’s tour of NASA:

President John F. Kennedy was visiting NASA headquarters for the first time in 1961. While touring the facility, he introduced himself to a janitor who was mopping the floor and asked him what he did at NASA. “I'm helping put a man on the moon!”

Engagement is easy to test. Ask your employees or your users what is your company mission. If you are surprised by the answer and you don't receive the “put a man on the moon” response, it might be time to follow Marvel’s lead...

P.S. If this has sparked an interest, there are lots of fantastic books to read on engagement. For any organisation who wants to get some quick, easy to implement ideas I’d recommend ‘136 Ideas for Rockstar Employee engagement’.

Got an idea for a Tech Startup? Apply to our mentorship programme today!